More than a dozen Indian American executives nationwide have been named as regional winners in the 31st annual Ernst and Young U.S. Entrepreneur of the Year competition.

The winners were selected from countless entrepreneurs, including dozens of Indian Americans, chosen as regional finalists in 25 regions throughout the country.

At least 13 Indian Americans were named from nine regions, including three from the Southeast region.

Among the Southeast regional winners were Satya Tiwari, Sidd Ahmed and Asif Ramji.

Tiwari is the president of White, Ga.-based Surya, a family-run home decor company, since April 2004. He began his career as an investment banker following his graduation from Northwestern University in 2000.

Ahmed has been the president and CEO at VDart Inc. dating back to April 2008. Prior to that, he was vice president of sales at Systel Inc. Ahmed is a graduate of GCE and earned certificates at Northwestern University’s management school and Dartmouth’s school of business.

Raghu Marwaha and Rohit Marwaha of the Marwaha Group were among the winners in the Orange County region. The family organization owns and operates multiple Subway restaurants in Southern California. Raghu serves as the CEO of the company, where he’s been since January 1994. Rohit is a managing partner at the company, which he joined in August 1994.

Devanur, a graduate of the University of Mysore and Columbia University, has been with the enterprise technology management company since September 2010. He has also served as the CEO at TCG-Ivega Corporation from 1997 to 2005 and GC Advanced R&D in Bangalore from 2006 to 2010.

Ruparel co-founded Azure Knowledge Corporation, a global market research solutions company, in April 2001. In addition to Azure, Ruparel serves in various adviser, chairperson and management roles for different companies. He is a graduate of North Gujarat University and the Indian Institute of Management Bangalore.

Kachru has served as the CEO at Altruista Health since October 2010. He has been with the company since 2007, previously serving as its chairman and president. The Maulana Azad National Institute of Technology and University of Chicago Booth School of Business graduate has also worked at Cummins Inc., Dunrath Capital, Procter & Gamble and Americhoice.

In the Greater Philadelphia region, Jagath Wanninayake of Suvoda LLC was named a winner. Wanninayake has been the co-founder, chairman and CEO at Suvoda since September 2012. He also serves as the co-founder and executive chairman at Mixette and managing partner at Serendip Ventures. A Swarthmore College graduate, Wanninayake also co-founded Jamity Records and Clarix.

Ravi Kunduru of Ventech Solutions was named a winner in the Ohio Valley region. Kunduru serves as the president and chief innovation officer of Ventech Solutions, a Columbus, Ohio-based company he founded in 1994. He has served there for 23 years running. The Indian American earned a bachelor’s degree in computer science from the University of Madras SRM College of Engineering.

In the Gulf Coast Region, Swapnil Agarwal was chosen to represent the area as a regional winner. Agarwal serves as the CEO at the Houston-based Nitya Capital, a real estate private equity fund company, where he’s been since 2013. Also since 2013, Agarwal has served as the CEO at Karya Property Management. He has previously worked at Forum Partners, and Simmons and Company International. He earned a bachelor’s from the University of Texas at Austin.

In the New England Region, Raj Shanmugaraj of Acacia Communications was chosen as a winner. He has been president and CEO at Acacia since February 2010. He has also served as vice president at Alcatel and chief executive at Astral Point Communications. Earlier in his career, he served as a director at Motorola. He earned a degree at the National Institute of Technology.

SendGrid CEO Sameer Dholakia was named a regional winner in the Mountain Desert region. Dholakia has been the CEO at SendGrid since September 2014. Previously he was group vice president and general manager of cloud platforms group at Citrix Systems, the CEO of VMLogix Inc. and held various leadership roles at Trilogy. He earned a bachelor’s and master’s from Stanford University and an M.B.A. at Harvard Business School.

In the Southwest, Dr. Sulman Ahmed of DECA Dental was named a winner. Ahmed is the CEO and founder of the DECA Dental Group, which he founded in 2008. He is a graduate of the University of Texas at Dallas and the Tufts School of Dental Medicine.

Lalit Chordia, CEO of Thar Energy, was named a winner in the Western Pennsylvania and West Virginia region. Chordia has been with Thar since January 2011. The Indian American is a graduate of the Indian Institute of Technology Madras and Carnegie Mellon University. 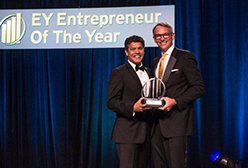